PakMan to the Rescue- Rug of the Week #2 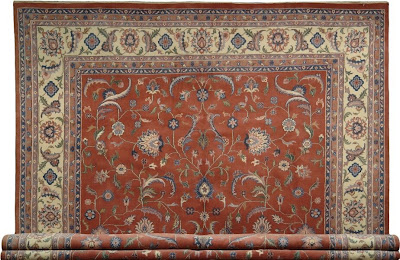 Pakistan has been producing some fine rugs for some time now (also some not so fine ones). When they copy designs typically found in Iran, very often they are called "Pak-Persians" or "Pako-Persians" to indicate that fact. I recently received just such a rug, pictured, and found it to be both very well made and tastefully done. The colors are all muted, with the field (background) color a rose-madder with a pinkish tone, rather than red. It was sold to me as an 18/20 line rug, which means that nominally there are 360 knots to a square inch. This allows for intriquecy of pattern that cannot be found in rugs with few KPSI (knots per square inch) The vendor claims that the weavers used imported New Zealend wool, and I can believe it as it is extremely soft, and there is a consistancy of color throughout this beautiful piece. Why purchase such a rug? Cost savings over similar Persians can be substantial. This rug, 14ft. 5in. x 10ft. 2in. provides an extremely large option for somebody looking for a quality piece at a reasonable price.
Posted by Rug Crazy at 12:09 PM 2 comments:

Rug of the week Part 1

This wonderful Kurdish rug just came in, its enormous (13 ft 2 in. x 5 ft. 2in.) and wonderfully tribal. Kurdish tribes in Iran are located in the north in both western and eastern parts of the country. Originally, they made multiple use carpets for everyday household purposes, and were not for commercial sale. They are very strong rugs and are used mostly in high-traffic areas. Kurdish carpets commonly have hexagonal medallion designs, and are multi-colored. I haven't put this one on the web-site yet, as I'd love to find a place for it in my house, but its rather imposing size leaves me very few options. There is something about this one that really makes me wish I could meet the weavers - the uniqueness of this piece makes it truly a work of art
Posted by Rug Crazy at 12:05 PM 1 comment:

OK. Blogging is not the latest thing any longer, but we old guys learn slowly. I will try to present the trials and tribulations of the Rug business, with a bit of humor in between... So until I'm up and blogging, please check out my website at http://www.rugcrazy.com
Rug Crazy in Rupert
Posted by Rug Crazy at 12:15 PM No comments: