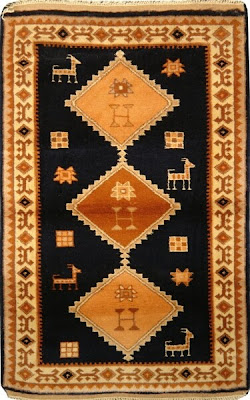 Yeah, it's been quite some time since my last post, and a lot has happened. On September 29, 2010, an embargo on Persian Rugs took effect, which mean none are being imported (legally) into this country. The last such embargo lasted 13 years, from 1987 through 2000. Prices took a big jump, even before it happened and have seemed to level off for the time being. I think everyone (including me) brought in whatever they could in anticipation. It's only a matter of time to the the effect on the rug market. I've seen lots more Turkish, Afghani, Pakistani, Indian and Chinese rugs being offered from my usual suppliers - you can see photos of a couple of new Turkish pieces here on the blog. It seems that the prices of these rugs is generally higher than they were before this all got started, so we'll have to see how this shakes out. Meanwhile, I have about 500 pieces in stock, and am trying to hold the line on my prices. No promises, but I'll try to be more attentive to this post. Steven
Posted by Rug Crazy at 1:16 PM